KZK Records | Requiem for Utopia…An Interview with the composer

During this Pandemic times there’s new music coming from Joaquin Berrios… Requiem for Utopia.
We video chat with composer and this is what he told us.

Kzk: How are you doing during this pandemic!?

JB: All and all, doing good. Can’t complain. We are quarantined here, in the USA and in all the different places that we live on the planet…my brother is in Spain, Parents and family in Chile and in laws in Argentina. It’s a very special feeling knowing that the whole world is in a similar situation. It’s clear that we are all together in this one. As a species…I guess, It’d be a good idea to use this down time to think about what’s important and what’s not. Do a little soul searching, find ideas on how to built a better future.

Kzk: Can you tell us a bit about the Album title!?

JB: Yes. A requiem as you know, is a mass for the dead…in this case I’m referring mostly, to the death of obsolete Social models and the aspirations that guided most of both hemispheres of this planet for may centuries. There’s certainly a generalized disappointment with the ruling systems including religious structures. Humans are looking for a better way to relate to each other and to the Planet as a whole. As old concepts die…new ones must be born.

Kzk: What triggered this questioning!?

JB: Well…it’s something that I think, many people had been questioning for a long time. You can find writings about the coming of a new era in popular culture and in some very “sacred” old scrolls. There’s a generalized sense that change is coming.
Now, while making this album, I was specifically struck by the Social uprising going on in Chile since last October. It brought up to the surface something that was lingering in the collective consciousness for decades…the need for a more equal distribution of the goods and opportunities given to the people to achieve their dreams. I do not believe that the state should be the answer to everything, but there are certain areas that must be protected from greed, like education and health. The idea is that everybody has the same basic rights and the field of opportunities is leveled. There will always be leaders and followers but everybody should have the chance to develop their talents to the max. There’s millions of incredible people that just get lost because of the insufficiency of opportunities to develop their full potential.
At the same time, I was also struck by the lack of moral fiber displayed in our US congress during the failed impeachment of president Trump. It was very depressing to see and hear our supposed leaders suppressing common sense and nation unity in favor of political gain. It’s really hardto believe in leadership when the leaders are a bunch of selfish pricks. It was a pitiful performance.
On top of all of that, I saw a documentary about the second world war…could not believe the amounts of people dying for the most wrongful reasons…. and this is not ancient history, it just happened a few decades ago and it easily could happen again.

Life is short and precious. We should try to make the best out of the numbered days we have in this planet.

Kzk: So the Album is mostly a socially oriented quest!?

JB: Yes and no. I think It’s more of a Human question…as a whole. Sometimes we forget, but spirituality has an important roll in our development. Spirituality may be a social experience, but it’s also a very personal, individualistic one.
I think that we have to re-define our priorities…We’ve known for a long time now, that Money can’t by happiness and there’s really no point in slaving ourselves our whole life in the pursuit of a retirement that may never come.
Life is short and precious. We should try to make the best out of the numbered days we have in this planet.
What to do with our lives!?…I know it’s a complicated question…I mean, I know that we all have to work in order to build the spaces needed for our development…”It’s a dirty job…but somebody has to do it”
I think, that there’s two aspects of it in creating an effective workforce.
First, we should compensate people fairly. From a fair minimum wage, that will ensure the dignity of the worker to, somehow , regulate the avaricious wages that some unnamed CEOs award themselves…again…the idea, is to somehow, level the game…like I said, money do not buy happiness…” but sure it helps”. (Laughs)
Second, I’d also like to see some sort of matching app…like the ones that exist to find Love…but in this case to find careers.
We must find the right workers for the right Job! If you have passion for what you are doing…you are a Happy being! and by extension…more productive!
In my case, I can spend endless hours creating music. I love to do the work involved in it’s creation. Unfortunately, as you well know…been my label and all…I do not make any money with it. That hasn’t stop me, and like they say…”If there’s a will…there’s a way”.

Kzk: about the money…we are positive that with this Album it’ll start to come in! (laughs)

Kzk: Can you tell us a something about the composition process…we noticed that Piano is the main instrument in this work!?

JB: Yes! After a couple of decades without touching the keys…I decided to get back to it. I wanted to do something different from the last couple of albums. I wanted to start from a different place.
So,  I begun to practice daily, like in the old days, playing scales and arpeggios. I really wanted to get away from the classic Rock Guitar formation, and what better choice than going back to the mother of all Instruments…The Piano!
Everyday, as a routine, I’d practice for a couple hours and then improvised for another. This Improvs I recorded to the computer and from all those hours…chose the motives and bits that I liked the most.
After deciding on the selected music, I’d work on it…form, arrangements and melodies. I consciously  decided to write everything with the Piano…The Bass lines, guitars, vocals, etc. it was an interesting orchestration exercise.
Usually I’d grab the Bass and play along till I’d find the lines that I wanted…this time was all piano…and then I extracted melodies from there. I liked the process a lot, and also was a very controlled production noise level wise…a lot of headphones and low wattage.

Kzk: Anything you can tell us about writing the lyrics!?

JB: Yes. The lyrics came to be in a very special way. Once I had the Music layout, I felt for some reason a very strong sense of urgency. Like I was going to run out of time before I finished the Album…a premonition! (Laughs)…So, I sat one day and started writing all the words without re-thinking them. A total stream of consciousness. I know they reflect my worries about Chile, America and the world in general as I mentioned before. I was truthful to my hart and it’s basic lyrical instincts. I did not re-write whatever I put down on paper. I made this attitude part of the concept and process. I had already laid all the Music and the order of the songs with their names in the same way…what ever came first to mind stayed that way. That’s why there’s Spanish names for English lyrics.
It’s worth mentioning, that In this songs came randomly very well defined Ideas and characters…I think it’s a very visual composition…I wanted to make a movie out of it, but the virus and it’s consequent quarantine hit…maybe one day I’ll be able to stage it.

Kzk: You said characters…could you explain a bit more!?

JB: Yes. when you follow the music there are this different voices, all of them tell the same story but each one has a unique way of expressing themselves.
There’s this angry consciousness, this sarcastic angelical observer from above, the introspective men, the chorus of followers etc. I don’t know…since it came out of this stream of consciousness there’s a lot still open to interpretation. I’ll figure it out.

KZK: I noticed that for this album you performed all of the vocal part!?

JB: Yes I did. I wanted to have Joanna Hughes again singing, but we run out of time. The Pandemic took over and was impossible to get together. Same happened with Michael Sinisgalli. I wrote and had ready the sax parts, but never got to record them. It’s sad but at the same time I think that gave the Album a unique sound. Something different from the last two. I was able though, to record the Drums performed by my friend and amazing musician Phoenix Rivera. Like I said, I felt that I was running out of time and even tough the date chosen to record the drums, Feb 1st, coincided with the Super ball here in Miami we went ahead against all odds. Traffic was crazy… and the virus was already an issue in America. We did it any way. with the help of my good friend Gastón Zukowski, we moved all the required gear to Yellow Wings Studio, Alejo’s place (My friend and brother in law) in little River Miami. There we recorded the drums in record time and came back with the Gear just in time for quarantine.
Mixing and Mastering was another odyssey. My daughters, due to the pandemic, left school and my wife started to work from home…I mixed and mastered at ridiculous low levels and with the Disney channel blasting in the background…I think it came out awesome though! Ja! (Laughs)

KZK: What are your plans for the future!?

JB: Well…the future is kind of uncertain this days. First, will be to protect the Family as much as possible from this virus, until it’s safe to go out and mingle. It was, an still is, my desire to get back on stage…I know…kind of bad timing…but I’ll find the way. This big mess is going to bring big new opportunities, Music is a very important part of society and Humans are not done yet. Like the song “Raven Claw” Says…”There’s no true extinction till we’re gone”
Something that is worth mentioning, is that until now., until this quarantine, I did not quite understood the value of “entertainment”. I always thought of Music as Art. Like something elevated and for the Spirit…now I know it’s mostly, pure entertainment and that, is a fundamental part of life.
We spend infinite hours without purpose…Sometimes all we need is a bit of distraction, plain entertainment to avoid emptiness and hopefully, one, that makes us better, that inspire us…but it’s an individual choice. Every art form is valuable..from classical, to folk to popular…everything has an audience. I just have to find mine 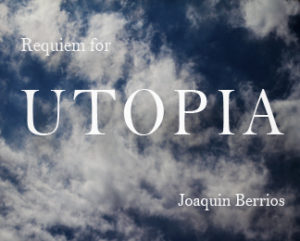 Requiem for Utopia…An Interview with the composer